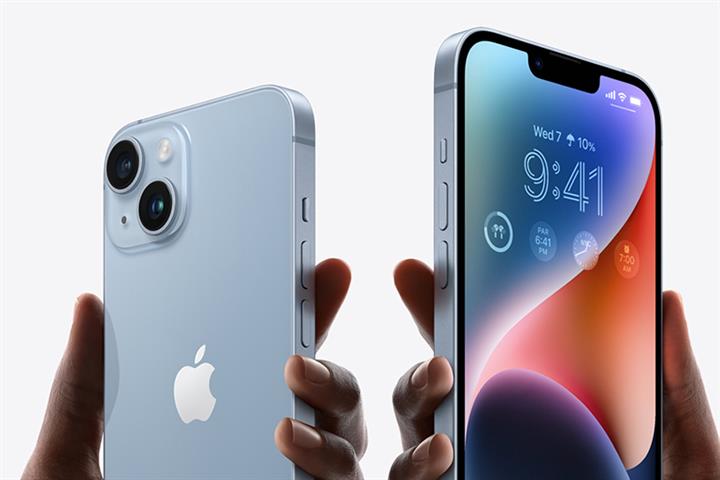 (Yicai Global) Sept. 8 -- The fact that Apple has kept the price of the low-storage version of its new iPhone 14 series unchanged and introduced some attractive upgrades could prompt a buying boom which will consolidate the US tech giant’s position in China’s deluxe mobile phone market, US global market intelligence firm said today.

Apple launched its much-anticipated iPhone 14 series on Sept. 7. Despite global inflationary pressure, the price is consistent with the iPhone 13 series, although the models with bigger storage capacity cost up to CNY500 (USD72) more.

Despite some disappointments, such as the use of a previous generation of chips and slow charging speeds, the new series has some strong selling points. The Plus models boast larger screens, a reworked ‘Dynamic Island,’ improved imaging and a new range of colors.

Although China’s smartphone market is unlikely to improve much this year as an economic downturn hammers consumer spending, products that give users a different experience could still entice them to upgrade their phones, IDC said.

China’s high-end cellphone market has been less affected by the overall slump in sales. Handsets priced at more than USD600 accounted for 13.3 percent of high-end smartphone sales in the first half, an increase of 1 percent from the same time last year and a gain of 3.8 percent from 2020, according to IDC data.

The change in the appearance of the iPhone 14 series and the better imaging are expected to become the most attractive selling points for the new series. Coupled with the other upgrades, they can help California-based Apple maintain or even expand its foothold in China’s deluxe mobile phone market.