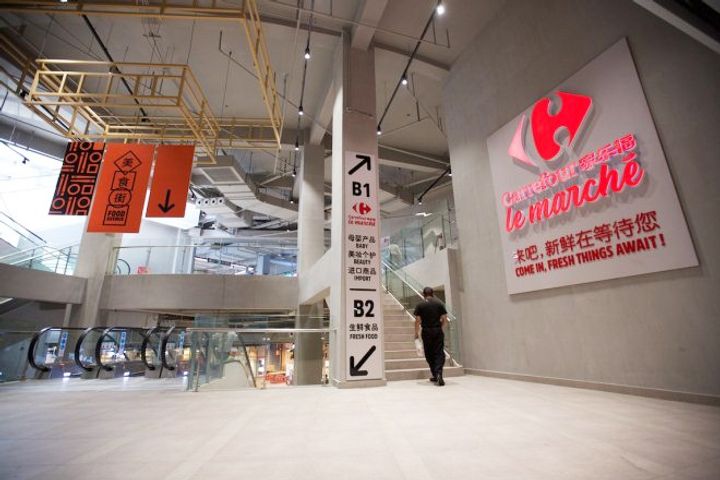 (Yicai Global) May 21 -- French supermarket chain Carrefour SA has opened its first smart store in China after teaming up with the country's largest tech firm by market cap Tencent Holdings Ltd. to adapt to the latest trends among young consumers.

The pair opened Le Marche in Shanghai yesterday, a supermarket focusing on restaurants, fresh food, imported goods and other commodities under the Carrefour brand and the company's first global initiative in smart retail.

China's retail market is changing fast, Carrefour China's chief executive Thierry Garnier told Yicai Global, adding that more than 75 percent of tenants in the new store will sell their products as an experience.

Tencent has been making its way into the retail sector as it looks to catch up to tech rival Alibaba Group Holding Ltd. The latter has been pioneering the New Retail model, described by Alibaba Executive Chairman Jack Ma as "the integration of online, offline, logistics and data across a single value chain," and many of the country's biggest firms want a slice of the pie.

Tencent and Yonghui Superstores Co., one of China's biggest supermarket chains and also invested in by Tencent, announced in January that they would invest in Carrefour China.

In the smart stores, customers are able to sync their WeChat and other Tencent-affiliated social accounts for payments and can also pay using facial recognition. The two firms have also teamed up in marketing, using some of the animation series which belong to Tencent to draw in fans and increase sales.

Some of the equipment used at the new store is expensive, but Carrefour can cut costs by optimizing layouts and reducing the use of such equipment, Garnier added. The chain can also use a back-end system developed by Tencent's YouTu Lab to reduce the costs of changing its existing system.