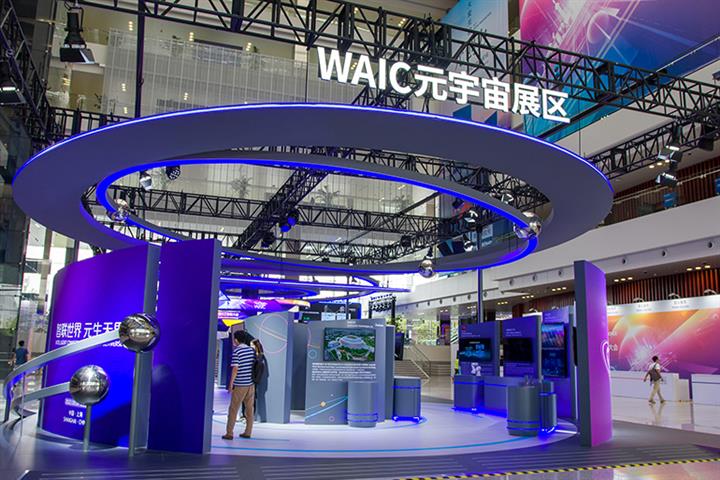 (Yicai Global) Sept. 5 -- The value of projects signed at the World Artificial Intelligence Conference in Shanghai in the past two years has reached CNY90.5 billion (USD13.1 billion) when this year’s deals are added, according to a city official.

Some 195 projects were agreed at the past two annual events, Wu Jincheng, director of the Shanghai Municipal Commission of Economy and Informatization, revealed at the closing ceremony of this year’s WAIC on Sept. 3, at which over 25 AI deals worth nearly CNY15 billion (USD2.2 billion) were penned.

Wu added that Shanghai also kicked off CNY1 billion (USD144.3 million) worth of fundraisers in the field and rolled out a CNY20 billion credit innovation tool to support the metaverse sector’s growth.

“Shanghai has formed a sound, open, and shared AI ecosystem with an industry cluster, active innovation, and integrated elements,” he said.

While tech innovation, industrial application, legal ethics, and ecological construction were the main themes of the three-day event, ‘AI + metaverse’ was the hotly discussed topic. A number of metaverse platforms and tie-ups were unveiled at the conference to foster AI empowerment and bring the metaverse’s multiplier effect into full play.

Having designated AI as one of its three frontrunner industries, Shanghai is exploring integration and mutual promotion of AI and the metaverse and is probing new development opportunities. The city’s AI sector more than doubled in value to CNY305.6 billion last year from CNY134 billion in 2018.

Shanghai plans to have a CNY350 billion (USD50.5 billion) metaverse economy within three years by cultivating industry champions to boost its software and information services sector to CNY1.5 trillion (USD216.8 billion) and its electronic information manufacturing industry to CNY550 billion by 2025, according to a development plan the local government published in July.

The city has advantages in talent, policies, data, and ecosystem to expand AI and metaverse industries, according to Yang Xiaokang, executive vice president of the AI Institute of Shanghai Jiaotong University.

Shanghai is taking the lead to develop the metaverse as a new business, Yang told Yicai Global, adding that the metaverse is not about a single technology but integration and mutual promotion of technologies, so the city must continue to enhance and mine its advantages in existing business ecosystems.