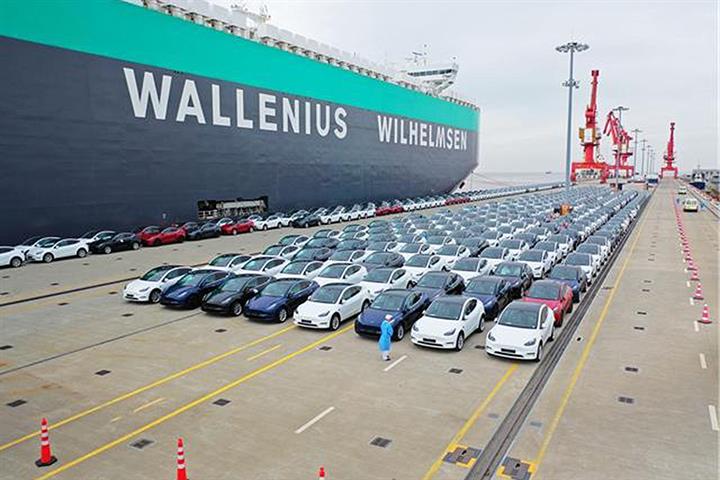 (Yicai Global) May 18 -- US electric car startup Tesla’s Shanghai gigafactory is battling to return to full capacity, as problems in the supply chain due to the city’s prolonged lockdown to stem an outbreak of Covid-19 hamper production, and is now operating at just over 45 percent capacity, Yicai Global learned from a series of interviews.

More than 8,000 employees have been staying and working at the plant in the city’s Lingang New Area in so-called closed-loop management since the factory re-opened on April 19 after a three-week shutdown. Some workers have even been there for more than two months. Staff members stationed at the plant are being paid an extra CNY270 (USD40) a day, with CNY300 on weekdays and CNY100 at the weekend, according to unconfirmed data.

But production is being held back by problems in the supply chains. For instance, a firm that supplies Tesla with connector components has only returned to between 50 percent and 60 percent output and there is great uncertainty about when it can return to full capacity, a manager said.

The gigafactory is churning out around 1,000 vehicles a day, compared with more than 2,000 units before the latest wave, a manager said. Workers are still on a single shift whereas before they worked around the clock.

Chief Executive Officer Elon Musk had claimed that the Shanghai gigafactory would be back to pre-pandemic levels by the middle of May, but this goal seems hard to achieve now. The company has submitted a list of over 100 suppliers to local authorities requesting assistance for them to resume production.

Although it will take time for the Shanghai plant to return to full capacity, Tesla has already restarted exports, shipping 9,000 electric vehicles to Europe and other countries in the past week.

“To help speed up Tesla’s export procedures, Shanghai customs staff worked through the night to complete a workload that normally requires three to five working days,” an inside source said.

Bill Russo, founder of vehicle industry consulting firm Automobility, remains bullish on Tesla’s long-term outlook in China. “The impact of the pandemic is only temporary, and the tensions in the supply chain will ease over time. The Shanghai gigafactory is an important base for Tesla to reduce systemic costs by laying out local supply chains, and it perfects Tesla’s global manufacturing configuration,” he said.

Since reopening in 2019, the Shanghai plant has become Tesla’s largest production base. Last year, it delivered more than 480,000 vehicles, accounting for 52 percent of the company’s worldwide total, including 160,000 exported overseas. In January the Shanghai factory sold 60,000 EVs, nearly 70 percent of which were exported.