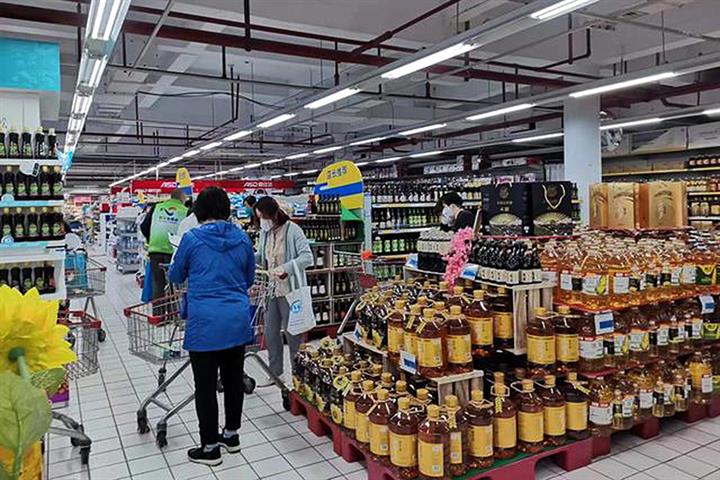 (Yicai Global) May 18 -- The first supermarket that resumed in-store operations in Shanghai had a 50 percent jump in sales on the first day, compared with before the Covid-19 lockdown started.

About 400 customers divided into 60-people groups went shopping on the first day, Luo said, adding that each group was given about one and a half hours. Although their numbers were less than in pre-lockdown, thanks to the unlimited consumption quota, each of them spent over five times the usual amount, he noted.

During lockdown, the store provided bulk distribution and fixed-guarantee supplies online while working under a closed-loop system, with daily sales reaching only about CNY40,000 to CNY50,000 (USD5,930 to USD7,415).

Most of the store’s customers were from neighborhoods unaffected by Covid-19. After getting green passes from sub-district authorities they were transported to the store by special buses, and were required to shop at different times and in specified group sizes.

The stocks of vegetables, fruits, grains, and oil were three to five times the usual amount, as demand rebounded to about 90 percent of the normal level. “We’ve a large stock of soy products, which were hard to get before,” said Luo, adding that “about 80 percent of suppliers have resumed operations.”

The 23 employees who have been working at the store since March 15 have been living in the store itself, offices, and other places in the building.

To prepare for reopening, the staffing level was raised to 34. As they are dealing with customers face to face, they are required to wear personal protective equipment, including clothing, gloves, N95 masks, and face screens.

As the only store in the building to have reopened to the public, Luo said that the washrooms were only available to employees and will be sanitized once every two hours. The whole store will be disinfected three times a day.